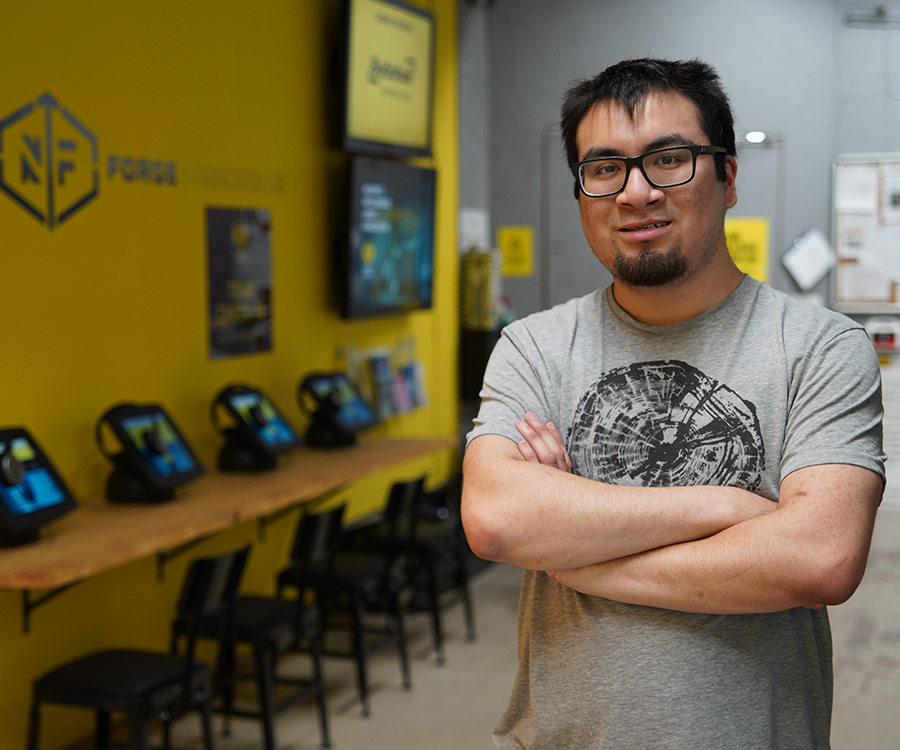 The North Forge Indigenous Scholarship was designed to give Indigenous youth, between the ages of 18-24, who are interested in entrepreneurship an opportunity to innovate in a collaborative and safe space.

In 2018, Christopher Kematch was selected as one of our two scholarship recipients. Christopher received a one-year membership to the Fabrication Lab, which included mentoring, training on the machines, shelf space rental for projects and materials/consumables.

A family member told Christopher about the scholarship, and after looking into it, he discovered the Fabrication Lab had a lot of resources that would prove to be beneficial.

“I was really interested in 3D printing molds for casting concrete and silicon,” says Kematch, “and it all spiralled from there as I expanded from the lasers to everything else.”

His time at the lab started with mentoring and orientation from our entrepreneur in residence, Matt Olson. Matt and other members provided Christopher with training for the different equipment as well as necessary safety training. Canadian Footwear (located across the street from the Fabrication Lab), was also helpful with getting Christopher started on the right foot – literally.  They provided him with brand new safety footwear that he could wear while working in the lab.

Once the initial training and orientation were complete, Christopher was ready to go. “Christopher was very proactive, and learned how to use the software and equipment through his own initiative,” recalls Marney Stapley, Vice President of North Forge.

“I’ve been slowly self-teaching myself the programs and getting familiar with different settings and asking for tips,” adds Kematch.

One of Christopher’s prototypes includes a modernized dream catcher that is composed of concrete, steel and acrylic. “I’m trying to stay true to its natural elements while still adding a modern touch,” explains Kematch.

Christopher’s designs are so intricate and unique that it caught the attention of the Urban Shaman Contemporary Aboriginal Art Gallery. The gallery is only one of four art galleries in Canada that showcase artwork designed exclusively by Indigenous artists. When the gallery saw Christopher’s work, they invited him to attend their November show. The show will bring together artists and craftsmen to showcase and sell their pieces.

He doesn’t plan on slowing down after the showcase in November; in fact, Christopher intends on expanding his business. “I want to move on to mass production, set up a catalogue of items on the internet or sell at farmers’ markets.”

“I’ve always been interested in art and handcrafted goods, but it wasn’t always what I planned on doing – that is until I started working at the Fabrication Lab,” says Kematch. “I’ve enjoyed working and interacting with others here at the lab. It’s like show-and-tell every day; there is so much inspiration. We all borrow each other’s ideas and incorporate them into our own work.”

“Entrepreneurs face a wide range of barriers in bringing their ideas to life,” says Stapely, “and having access to our Fabrication Lab can play an invaluable role in moving their business forward. I’ve seen how our scholarship has helped Christopher bring his ideas to life, and I’m excited to see what he does in the future.”

Regardless of what direction Christopher decides to take his business in, one thing is for sure, he will continue using the Fabrication Lab, even once his scholarship is complete.