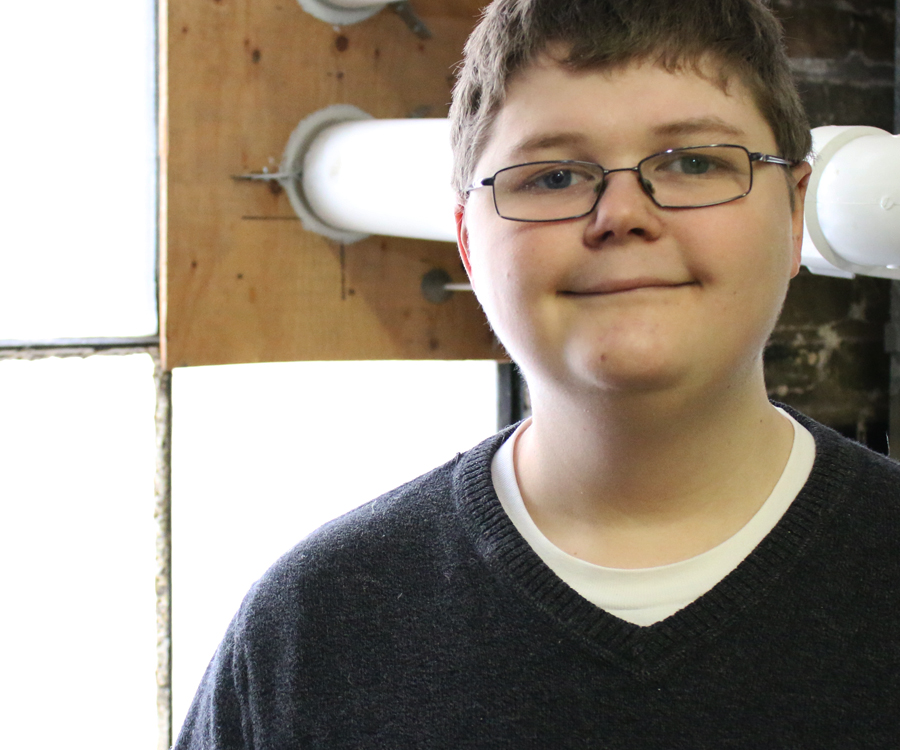 The 24-year-old graduate of Red River College’s Mechanical Engineering Technology program has been volunteering at North Forge’s Fabrication Lab for four years now. In addition to mentoring and hosting workshops, he likes to create mechanical puzzles – everything from Rubik’s Cubes to packing puzzles and wire entanglement-type puzzles.

“It can usually be about a two-to-three-day process just for prototyping, depending on the complexity and how driven I’m feeling,” he says of his puzzle making, most of which he does at the Fab Lab. “Going into the Fab Lab every day, it makes me smile because I see someone making something awesome or something beautiful. A lot of the time, they’re not necessarily sharing their techniques or anything, so that’s one of the things I’m trying to do, especially for Fab February, is kind of collect all the tips and tricks for the things I’ve learned and turn them into learning sessions, classes, and workshops.”

Shortly after getting his Fabrication Lab membership, Haché started teaching workshops and mentoring new members, working as the machine trainer for laser cutters and 3D printers.

“For the first little while, (I) was working with mentors, and now I am the mentor,” he says with a smile. “Any time a member has a question, I’m usually the go-to guy. I’m kind of the member that doesn’t really have much else to do, and so I’m totally free to help people out.”

Up until recently, Haché says he had to take side contracts to pay his Fab Lab membership (including glassware engravings for the Forks Commons), but thanks to a generous sponsorship from Western Scrap Metals, Inc., he’s able to focus on his puzzle creations and mentorship opportunities.

“That came as a very pleasant surprise!” he exclaims. “They offered a sponsorship to a deserving member, and it came to be that I was that deserving member. My membership is pretty much covered for the next year, which is really great, so that means I can really spend my time and energy on making cool things.”

“Western Scrap Metals is happy to support North Forge,” says Faith Kaplan, Vice President of Business Transformation at Western Scrap Metals Inc. “(Its) members represent the future success of manufacturing in Manitoba, which is important to our continued success as a fourth generation family business operating in North Point Douglas.”

“(Creating puzzles) is more of a hobby, but the skills that I’m learning in doing that are very good to have in terms of a career,” Haché says. “Having the experience of the Fab Lab, being a trainer – for a while I was in charge of safety as well – it looks very good on a resume, for sure.”

That career, which Haché says will probably be something in computer-aided design or computer-aided machining, is something he’s excited about in the future, but right now he’s just focused on his puzzles. Why? Because they take him around the world.

The International Puzzle Party has brought Haché to Europe, Asia, the United States and many other places to meet like-minded puzzle makers and enthusiasts. Haché creates multiple copies of his puzzles to trade with and sell to conference attendees, many of whom he meets online first.

“That’s the thing I build up for each year, yeah,” he says with a laugh. “Having spent so much time at the Fab Lab, each year I learn new skills and get to build on what I’ve already done. That helps make things that are more and more impressive each year.”