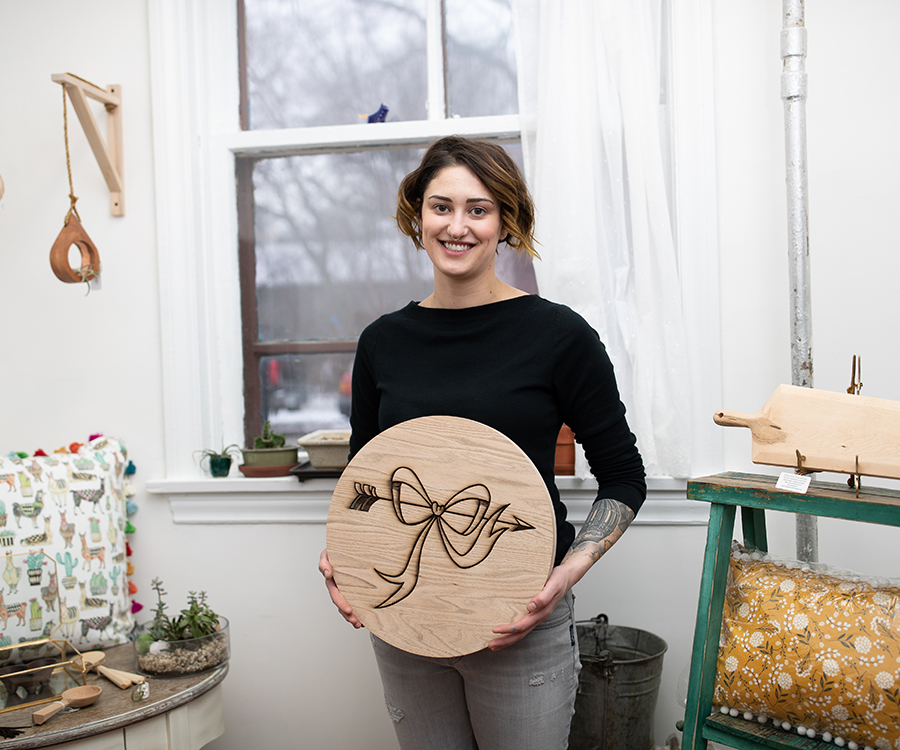 There’s a new addition to the Wolsely neighbourhood, and to many Fabrication Lab regulars, the face behind the business is familiar. Amy Krahn is the founder of Bow & Arrow Furniture Co., a home goods and furniture company with a brand new storefront at 962 Westminster Avenue.

Amy has shown an interest in woodworking since she was young, “I started doing little projects here and there when I was a kid, I always wanted to help my dad or have him teach me how to build stuff. I did a lot of carving on my own,” said Amy.

Amy attended university on a volleyball scholarship, taking metalsmithing and jewelry design. She was forced to quit after the sport took up too much of her time and she was no longer able to put her full energy into her work. Amy got a job as a hairstylist and it was during that time she developed a deep passion for refinishing furniture. She was ready for a change in career but knew she needed more education before doing so. Amy rented out her house and moved to Ontario for six months where she took an artisan furniture program, when she arrived back in Winnipeg she sold her house and focused solely on her business.

It was a friend of Amy’s that told her about the North Forge Fabrication lab almost three years ago. She went on a tour of the facility and immediately thought it was perfect. The Fabrication Lab would give her the opportunity to pursue her passion without having to pay for machinery or supplies. “Not having access to machines means I would only be refinishing furniture. I wouldn’t be able to build, I wouldn’t be able to even cut out a cutting board,” said Amy.

But it wasn’t just the machinery at the Fabrication Lab that had an impact on Amy, it was also other members around her. “Being around entrepreneurs has helped me get rid of some self-limiting beliefs. Having people to talk to and get advice from is helpful. If I have a difficult client or customer, I know the North Forge entrepreneurs have my back and will talk me through it.”

Amy was selling the majority of her pieces through word-of-mouth and by attending pop-ups but as time went on, hauling her products to and from pop-ups became taxing. “I already had market validation and I had the inventory. I wanted to create a space that people enjoy coming into. I spent so long looking, and not finding the perfect environment that I decided I had to create it for myself.”

And, Amy did just that, her storefront on Westminster is carefully crafted and welcoming to anyone who walks through the door. Visitors can expect to be greeted by the Bow & Arrow shop dog, Whiskey who will enthusiastically follow you around as you explore the store. There are ready-made products like spoons and cutting boards on display and also hidden perfectly in drawers and cabinets, all available for purchase. Customers can also consult with Amy on services such as custom built or refinished furniture. But don’t expect to have an old piece of furniture refinished back to its original state, “I like to give things a new life and new look,” explains Amy. Her goal is to create a piece that fits well with her customers’ current style and aesthetic.

So, now that Amy has opened her own storefront can North Forge members still expect to see her around the Fabrication Lab? The answer is, yes! “I’ll still be at the Fabrication Lab. The ultimate goal is to have my own shop with my own machines but I’ll still be involved at North Forge, simply for their focus on entrepreneurship.” Amy credits some of her success to knowledgeable mentors such as North Forge Vice President, Marney Stapley and Entrepreneur in Residence, Matt Olson. She hopes to share her knowledge with up-and-coming entrepreneurs at North Forge in the future.