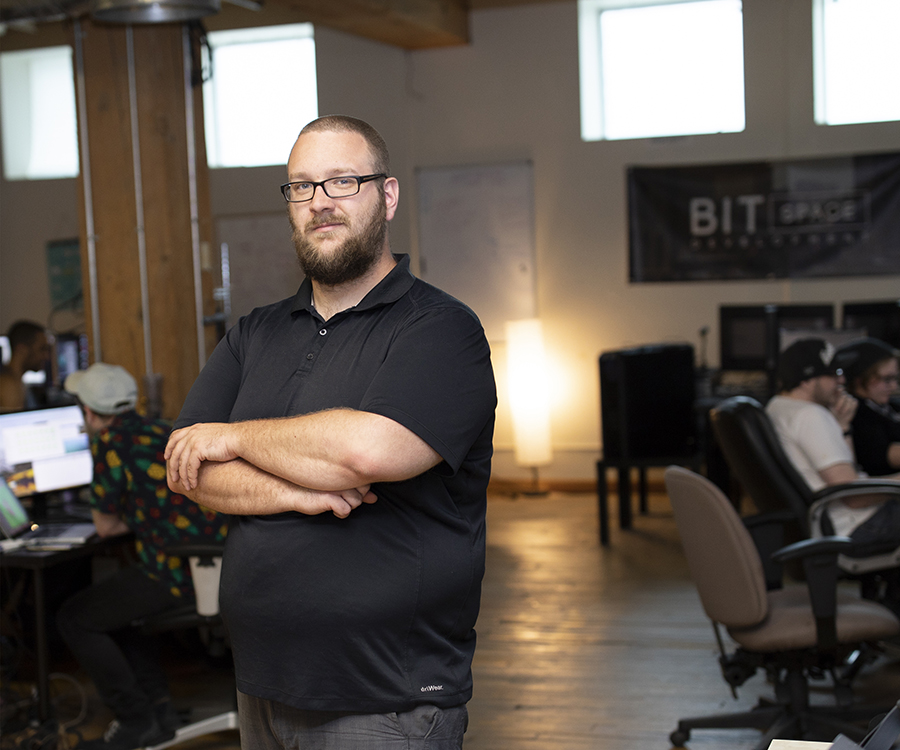 Dan Blair always knew he wanted his work to make a positive impact on the world around him.  But in order to make ours a better reality, he turned to a virtual one.

Blair is the founder of Bit Space Development Ltd., a digital media company based in Winnipeg, Manitoba, focusing in virtual and augmented reality to creative interactive learning experiences. But as with many start-ups, where the company ended up isn’t exactly where it started.

“Bit Space has really evolved as a company in a very short amount of time,” said Blair. “We started in web app development and then quickly found ourselves focusing specifically on 360° photography and videography. That led to the development of something called PanoPla, which was envisioned as essentially the YouTube of panoramic content.”

As Blair and his team went through the pitch circuit for the venture they found they were actually too far ahead of the curve and that the consumer need just wasn’t there yet. At that point they decided to focus on more of a niche market – real estate. The application worked incredibly well and allowed agents access to the technology they needed to provide 360° online tours of their properties. There was only one problem…

“The technology worked well in the real estate sector but it wasn’t having the impact on the overall space that I wanted Bit Space to have,” said Blair. “I didn’t start a business for the sake of starting a business – it’s always been about filling a need.”

That led Blair to change directions once again into the field of education and safety – which is where Bit Space has a found a strong foothold giving companies across Canada the ability to reach their audiences with important safety content in an entirely different way.

“Our primary focus right now is working with early adopting companies who want to use technology to teach and keep people safe,” said Blair. “Our work with the Manitoba Heavy Construction Association is a good example where we built a 360° learning environment for them that actually immerses trainees in the worksite where they can identify workplace hazards and mitigation strategies.”

Blair believes the industry has really only seen the tip of the iceberg when it comes to the application of VR and AR technology, as organizations are just starting to open their minds to what it can do for them.

“You no longer have to force people to play Plinko at your trade show booth, you can place people right inside your business,” said Blair, adding that the technology is now being used in some truly revolutionary ways. “Look at the UN, who is using VR to place people directly inside a Syrian refugee camp to try and really show the world what that crisis is all about. Rather than telling a story, VR can put someone inside the story and that’s a really powerful message.”

Blair’s dedication to making an impact through immersive technologies doesn’t stop with his clients, he also wants to make sure that same technology gets into the hands of other developers to help grow the space even further. It’s that mentality that led to Bit Space and North Forge Technology Exchange partnering to create the Advanced Information and Communication Technology (ICT) Lab.

“The lack of access to the latest tech is a huge barrier for start-ups because you just don’t have the capital to purchase the equipment on your own,” said Blair. “The ICT lab reduces the costs associated with building a business and innovation in the tech sector, which is a huge deal for companies looking to make their mark in the field.”

As for where Bit Space is headed, the dedication Blair and his team have to developing a company based on more than the bottom line is certainly paying off. They hope to expand into the U.S. market in the near future as well as double their staff in the coming year – all driven by what Blair describes as a simple philosophy.

“When I tell a story about myself someday, I don’t want to say I was in it for the money,” said Blair. “I have kids of my own and I want them to have access to every opportunity they reach for. That’s a big part of what Bit Space is all about.”